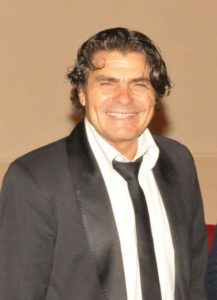 Luigi Centra was born in Carpineto Romano (Rome) and he lives in Veroli (Frosinone). His first artistic works were pictures of himself in black and white. He enjoyed painting them with the colour extracted by tissue paper. His first canvas was a picture of a vase of roses created on his mother old and drapped sheets between 1960-1965. Therefore he started to travel around and he began painting all kind of subjects, he also painted flowers and landscapes in Hofeini Ried (Germany) at n° 8 Neugassestrasse at Mrs Katerine’s. Then he went to Paris and Besançon (France) where he continued to paint and to write. After that he returns in Germany where he will remain for about 14 years in Worms and in Munchen in Baviera. To become popular he frequents pubs, coffee-shops and he travels by train giving away his poetry books and canvases. In 1981 he went to the Aden Gulf in Yemen then he moved towards Tripoli, Libia and then to London where he wrote with troubled happiness due to politics and love affairs. Some critics classified him as a “damned” (metaphorically) and worried painter and writer. He shows his works all over the world becoming popular with important and less important critics. He is also known as restorer of churches and palaces of old nobility having deep relationships with queens and kings of the whole world. Until now he has written many volumes of different kind of history, fiction and poetry. As protagonist he has interpreted different films on subjects suggested by Nino Manfredi to whom he feels much linked because he has personally known together with Sophia Loren, Carlo Verdone and, the unforgettable Marcello Mastroianni to whom he dedicated a whole page as associated journalist ANSA for his death in a well known review “Cronache Italiane”. We can find his works on the most important encyclopaedias and dictionaries of different places in the world and also in the most famous museums and galleries. Vittorio Sgarbi remarks: “THE ART OF CENTRA COMMUNICATES THE SENSE OF LIFE OF THE PAST, PRESENT AND FUTURE“. He is a very important international accademician so he has had approbations and gratefulness everywhere around the world. Since 1984, Centra is a member of the free trade-union italian writers association of Rome. Many critics made comments on his works and his personality. Antonio Oberti has written on the universal encyclopaedia C.E.L.I.T. “From impressionism Luigi Centra, little by little, has given life, with his inestinguishable serenity of inspiration, to an abstract relationship between his own psychic sensitivy and emotivity and the eternal motion of real life. Canvases often set on fire and patched with transversal string iron wires inserted which, like impalpable material, connect themselves to the diverse levels, in this way conceding a wide and total freedom to his creative sensitivy“. Critic Jonathan Zhivago says: “The artistic aggressiveness of Centra is the main thing that astonishes us“. From his flu of colours canvases, we can notice his desperate statement of the expressionism painting where the famous “IL GRIDO” (The Shout) of Much could be considered the manifest of this movement … “Today it’s admirable to find in our commercial art, a painter like Centra who owns that artistic titan rage which belonged to Michelangelo, the big colossus of the history of art“. The famous knight of the Republic Doctress Sonia Camporese adds: “Centra’s painting belongs to a familiar and audacious abstractionism but it is also easy to understand because it reaches the endless sources of the soul, lover of the harmony. The colours of his canvases change in sonorous vibrations liked by the mind extremely eager of beauty uncreated. The artist is a person extremely versatile to all poetic, literary and pictorial expressions. He has reached a level of MASTER obtained with tenacity for many years from the years sixty to nowadays. Searching for a satisfactory freedom of the creative mind that is the greater conquest of the “HOMO SAPIENS” who lives in a cosmos riddled of unnecessaly targets“. The Prof. Lino Di Stefano continues: “good artist and able restorer; Luigi Centra is also a capable writer who has known how to confide his feelings to works of painting but also to works in verse; these ones written in several occasions and in many parts feel, exactly, the different climates which have inspired and induced the author to express himself. Centra writes in a lyric that “human beings persist to recite the same rosary”, but if we paraphrase the couplet we can add that just the obstinacy that inspires him has conditioned the poet to realise his whole production, seen as he remarks, he isn’t afraid to meet life and the world“.